Tracing the history of Latin America and the Caribbean, we can see that indigenous peoples lived in every country before Columbus arrived. And Cuba is one of those countries.

Unfortunately, the indigenous peoples of Cuba have been almost extinct due to the invasion of Europeans, and there are no indigenous cultures or traditions left at all. But there are several factors that three races of indigenous people: Guanahatabeyes, Siboneyes and Tainos were once lived on the island.

The Cuban aborigines are the result of several migratory waves from different parts of continental America. Reconstructed migrations through archaeological evidence shows that following five groups in different era reached to the islands.

The first immigrants arrived on the island in 6000 BC from Mississippi and Florida in the North America, the Bahamas, Belize, Honduras, etc.

In 2500 BC, followed immigrants from Mexico, Honduras and Venezuela.

It is said that the people who came in the first wave were Guanahatabeyes, and the second time were Siboneyes.

The third migration arrived in 500 BC from Mississippi and Florida.

After that, 500 AD, the first arrival of the Tainos, the most advanced tribe among three.  They brought corn, cassava, cigarettes, and various tools to the island.

And finally, the Tainos from Venezuela in the 15th century. Tainos were not only making and using ceramics, but also farming and housing.

Guanahatabeyes lived throughout the island, but apparently evacuated to the western part of the island, which location is now Pinar del Rio, when the nation began to decline significantly.

The ancestors of the Siboneyes also inhabited the entire island at the time of the European discovery, but they had been subjugated by the Tainos and were driven to the western part of the island, called Soroa and Redondo Cay .

Finally, the Taino are said to have lived in Baracoa, Bain (Holguin), Moron (Ciego de Avila), and Cienfuegos.

Today, the island share very small percentage of indigenous dependents who can be found in Baracoa and Pinar del Rio.

Still, Baracoa presents some features that indigenous people have lived with its monuments and a cave called Paraiso where displays the dead body of the leader of the Taino tribe “Guama” and their tools. 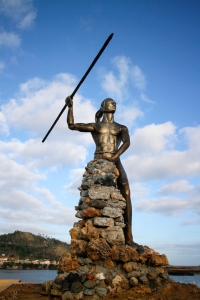 You will find interesting facts in Baracoa, don’t miss it!