The Capitol in Havana (Old Parliament House) is a symbol of Cuba.

There are almost always pictures and videos of the Capitol on TV programs and travel magazines that feature Cuba, so even those who have never visited Cuba should have seen it. 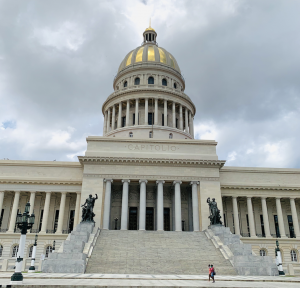 The Capitol was built in 1929 under the supervision of then-President Gerardo Machado. Once you see it, you will be fascinated by its unforgettable beauty.

The building is inspired by the Panthéon in Paris, St. Paul in London, and the Capitol of the United States, and features a neoclassical columnar facade and the largest dome among Capitols in the world. It looks like so much to the US Capitol, but the one in Havana is even bigger than the American one in both length and width. Also it has a courtyard inside and used bright colors which reminds of an atmosphere of Spanish colonial style, which is converted nowadays to “Cuban” characteristic.

Also, as if to symbolize the prosperity of the economy at that time, the building and interior are very detailed and gorgeous, using Italian marbles, French doors, walls and lamps. The construction lasted 3 years and 3 months and involved as many as 5,000 workers. The construction cost was $ 17,000,000 USD!!! Considering that value of money was much valuable at that time than it is now…wow then how much would it be???

Two bronze statues are erected in front of the Capitol. These are the works of the Italian artist Angelo Zanelli, one symbolizing the tutelary virtue and the other symbolizing labor. The front door that appears just after climbing 56 stairs, and the female bronze statue that symbolizes the republic inside are also works of the same artist. By the way, this female statue is the third largest indoor statue in the world, with a height of 15m and a weight of 30 tons.

In the hall, a diamond replica indicating the 0km point of the national highway is buried in the floor. The real diamond, which belonged to the last Russian emperor, actually had been buried in the Capitol, but it was stolen in 1946 and since then it was replicated. Fortunately the real diamond is back in the hands of the government and now it’s in the vault of the Central Bank of Cuba. 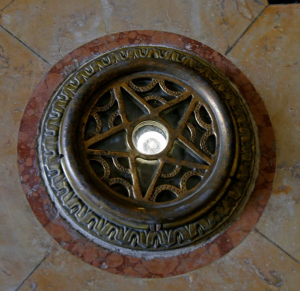 The Capitol was used as the Parliament building when it was built, but after the revolution it was used by the Cuban Academy of Sciences and the National Library of Technology after 1959. The entire renovation work began in 2010, and now it functions as the headquarters of the unicameral parliament, and is partially open to the general public.

The Capitol is one of the most interesting touristic site,  so be sure to visit it!