Hotel Plaza is a long-established 4-star hotel in Cuba. Nowadays, modern and large hotels are lined up around it, and it has become less noticeable. However Hotel Plaza is a valuable hotel with a history of more than 100 years. 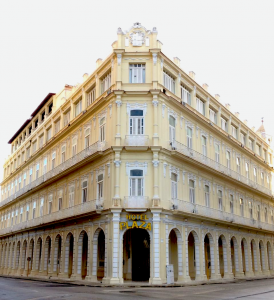 Hotel Plaza was constructed by a New York architect and opened in 1909. This year marks the 111th year. As it’s pride, German theoretical physicist Albert Einstein has stayed at this hotel.

Although it has been renovated many times, some parts still keeps its original condition, such as courtyard, lobby floor, and tower windows.

Having WIFI available at the restaurant / cafe on the 1st floor, and live music by local bands performed, lobby and cafe are usually crowded with hotel guests and passing tourists.

The best thing about this hotel is that it is located quite a convenient site to access to Malecon and Havana vieja!

The price is more economy than the surrounding hotels, so it is recommended for those who prefer a hotel than casa particular but don’t want to spend too much money.

If you would like to stay here, we are in charge of reservations!