It has been almost a month since Hurricane Irma attacked Cuba. A large part of the country was damaged, but Havana has recovered quickly to get back the tourism on the track although the rest of the country, especially North central coast including Cayo Santa Maria continues to struggle.
People who were planning to travel to Cuba might be wondering if they still can travel as they planned, but Havana is back to normal and visiting Havana would help the rest of the country recover since the tourism industry is vital for Cuba’s economy. 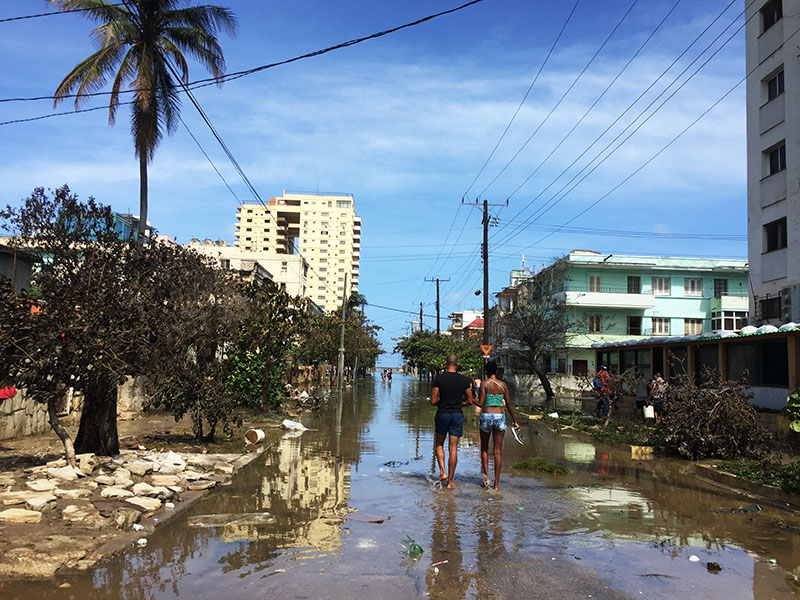 Here I would like to share my personal experiences of Hurricane Irma, which has different aspects from the regular news.

I’ve never experienced Hurricane myself, so when Cuban people started to talk about buying candles or preparing for outage of the gas before the Irma, I got nervous and worried how it would be. But Ivan, my Cuban coworker said “Don’t worry! We are used to this kind of situation. Because our daily life is just like Hurricane!”, then he laughed.

I understood what he meant, but still felt unsecured to stay in my apartment in Centro alone, so decided to stay over my friend’s house in Vedado district. I call this friend “Mom” because we are like a mother and a daughter sometimes.
On the way to go to her house on Saturday morning, I saw that the street along Marecon was closed by police, and the bigger waves than usual.
Many people were on the street, fixing their old windows and putting the water tanks. Supermarkets and local markets were filled with full of people who prepared for the Hurricane.

Big waves along the Malecón.

Arriving at Mom’s place, I helped her to put on tapes crossing over all the windows not to let the glasses broken from strong winds. We brought all the plants into inside the house, tided the handles of all the windows and saved water in a big bucket following her instructions.

The living room of my friend’s house

She started to cook earlier than usual and I took shower as she told me to do so before getting dark. At the evening, winds got stronger and while I was watching the news on TV, suddenly it turned off and we had a blackout. I looked outside a window and realized that the whole city got dark.

Using flush lights and a light of my cell phone, we had dinner. Although there were scary sounds of winds from outside, I was a little excited to eat in a dark feeling like I was in an adventure story. After dinner, we watched outside from a window again and found many trees that were bended by strong winds. Mom repeated “Dios Mio!” (Oh my god!) at least 100 times that night.
We had prepared everything, but winds were too strong and made an old window open, then winds and water got inside the house a little bit.
Since we didn’t have electricity, I went to bed early. I work up several times because of the noises, then fell in sleep again.
At 3 o’clock in the morning, I felt someone in my room and woke up. It was Mom. She opened a window and screamed at someone outside “Take it out! Take it out!” I walked to beside her, and looked at outside. There was a man on top of the roof of our next house in a heavy rain, and he was trying to grab a piece of a tin roof and throw it away to the ground. Mom explained that she had heard a fierce sound and noticed that a piece of tin roof was almost going to hit the window of the room where I was sleeping. She was afraid that it could fly into the room and hurt me, so called one of her neighbor and asked him a help.
I realized the terror of Hurricane was more serious than I thought.

The view from the room after Hurricane.

To be continued to Part 2 …